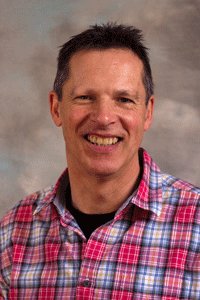 Kirk has been attending Ramridge Church for 20 years. It was in his first year attending the church that he met his wife Heather. They married in 1991 and have two children, Nathan and Naomi. In his 20’s Kirk represented England in the marathon and now does a little running and swimming for fitness. (In between him and Heather ferrying the children to numerous activities!) Kirk sings as part of the worship group, and enjoys singing modern worship songs as well as the more traditional hymns which are performed at some services during the year. Previously he and Heather led some activities for the church youth, a role which Heather has continued as part of the Sunday morning team. He joined the leadership team in 2007 and is passionate that the church be a welcoming place for all who attend and visit, while continuing to declare the message of hope that Jesus brings.